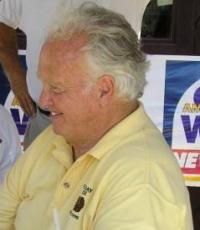 Nicknamed, the "Golden Boy", he is one of only a few players to win the Heisman Trophy and be awarded the NFL MVP
Fee Range: $5,000 - $10,000
Secure Paul Hornung
for Your Event

Paul Hornung, nicknamed the "Golden Boy," won the Heisman Trophy in 1956 as the year's outstanding player in United States College football and is the only player from a losing team to ever to win the trophy. Hornung is the widely considered as the greatest all-around football player in Notre Dame history.

In 1957, after graduating university with a degree in business, Hornung was drafted number one overall into the National Football League by the Green Bay Packers with whom he would go on to win four league championships including the first ever Super Bowl in 1967.

As a pro, he was one of the most versatile players in the history of the game, playing the halfback position as well as being a field goal kicker for several seasons. Hornung led the league in scoring for three straight seasons from 1959, through 1961. During the 1960 season, in just 12 games, he set an all-time record by scoring 176 points, plus, he also threw two touchdown passes. In 1961 he set the record for the most points scored in a Championship game.

Considered by some to be the best short-yardage runner to ever play the game, he was twice voted the league's most valuable player and during his career was chosen as an All-Pro twice and named to the Pro Bowl twice. He is one of only five players to have won both the Heisman Trophy and the NFL's Most Valuable Player Award.

Secure Paul Hornung for Your Event

Based on your interest in Paul Hornung as a speaker or for a personal appearance, Direct Sportslink has provided you additional links below for other sports talent with similar appearance fees, speaker topics, and categories that match Paul Hornung.