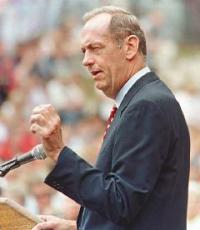 He is a former U.S Senator; He was a member of the 1969-70 and 1972-73 champion New York Knicks
Fee Range: Contact Us
Secure Bill Bradley
for Your Event

At Princeton, under coach Butch van Breda Kolff, Bradley was a three-time All-American and the 1965 National Player of the Year. In each of Bradley's varsity seasons, the Tigers captured the Ivy League championship. In total, Bradley scored 2,503 points at Princeton, averaging 30.2 points per game. In 1965, Bradley became the first basketball player chosen as winner of the James E. Sullivan Award, presented to the United States' top amateur athlete in the country. Bradley graduated with honors and was awarded a Rhodes Scholarship at Worcester College, University of Oxford. Bradley also served as captain of the gold medal-winning U.S. Olympic basketball team in 1964. Bradley's remarkable tenure at Princeton was the subject of Pulitzer Prize-winning author John McPhee's first book, A Sense of Where You Are.

After completing his studies at Oxford, and playing professional basketball briefly in Italy for Olimpia Milano (1965-66 season), where he won a European Champions Cup, Bradley returned to the U.S. to join the New York Knicks of the National Basketball Association. In 1969-70, he helped the Knicks win their first NBA championship, followed by a second in 1972-73. The second championship season was Bradley's best as a pro, and he made his only All-Star Game appearance that year. His first NBA title also made him the first player ever to win an Olympic gold medal, a European Champions Cup, and an NBA championship ring. Retiring from basketball in 1977, he was elected to the Basketball Hall of Fame in his first year of eligibility. In 1984 the Knicks retired his number 24 jersey.

During his NBA career, Bradley used his fame on the court to explore social as well as political issues, meeting with journalists, government officials, academics, businesspeople, and social activists. He also worked as an assistant to the director of the Office of Economic Opportunity in Washington, D.C., where he made contacts in Democratic circles. In 1976, Bradley also became an author, with Life on the Run, which chronicled his experiences in the NBA and the people he met along the way.

In 1978, Bradley decided to run for the United States Senate in New Jersey and won the seat in the general election with 55 percent of the vote. Some significant domestic policy initiatives that Bradley led or was associated with included: reform of child support enforcement; legislation concerning lead-related children's health problems; the Earned Income Tax Credit; campaign finance reform; a re-apportioning of California water rights; and federal budget reform to reduce the deficit, which he was one of only three senators to take this position. Bradley also ran against Al Gore in the 2000 Democratic presidential primary.

Secure Bill Bradley for Your Event

Based on your interest in Bill Bradley as a speaker or for a personal appearance, Direct Sportslink has provided you additional links below for other sports talent with similar appearance fees, speaker topics, and categories that match Bill Bradley.