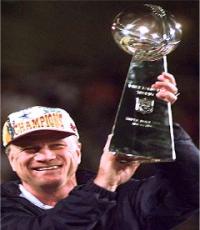 In 1973, Switzer became the head coach of Oklahoma, leading the team to undefeated seasons that year and the next. Oklahoma won national championships in 1974, 1975 and 1985 under Switzer's leadership. The team won or shared in the Big 8 championship every year from 1973 to 1980. During his sixteen years as head coach at Oklahoma, his teams won eight of the thirteen post-season bowl games they played in, and 54 of his players were selected as All-Americans.

Switzer was elected to the College Football Hall of Fame in 2002. In 2004, he received the Jim Thorpe Lifetime Achievement Award. In August 2007, XMSN added Barry Switzer as a part of the channel's expanded college sports coverage and also joined the FOX NFL Pregame show.

Secure Barry Switzer for Your Event

Based on your interest in Barry Switzer as a speaker or for a personal appearance, Direct Sportslink has provided you additional links below for other sports talent with similar appearance fees, speaker topics, and categories that match Barry Switzer.