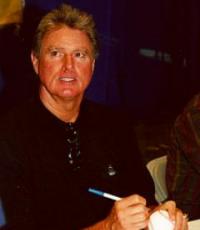 After pitching briefly for the NL's St. Louis Cardinals in 1965 and 1966, Carlton became a regular starter in 1967. It was the first of 17 seasons in which he made more than 30 starts.

His first 20-victory season came in 1971, when he had a 20-9 record. His reward was a trade to the Philadelphia Phillies. Known simply as "Lefty" by his teammates, Carlton won his first Cy Young Award in Philadelphia in 1972, compiling a 27-10 record for a last-place team that won only 59 games. He led the NL in victories and in complete games with 30, innings pitched with 346, strikeouts with 310, and ERA with 1.97.

Secure Steve Carlton for Your Event

Based on your interest in Steve Carlton as a speaker or for a personal appearance, Direct Sportslink has provided you additional links below for other sports talent with similar appearance fees, speaker topics, and categories that match Steve Carlton.