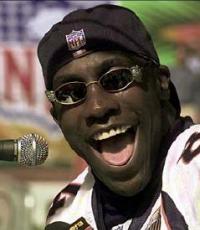 He is inducted into the Pro Football Hall of Fame; He won three Super Bowls as a player with two different teams (Broncos and Ravens)
Fee Range: $20,000 - $30,000
Secure Shannon Sharpe
for Your Event

Sharpe is a former NFL tight end and wide receiver who played 12 of his 14 seasons with the Denver Broncos. He was selected in the 7th round of the 1990 NFL Draft, 192nd overall, by the Broncos. He remained with Denver until 1999, winning two Super Bowl championships in the process. After the 1997 season championship, his first, he appeared on General Mills' Wheaties boxes with four other Broncos. After a two-year stint with the Baltimore Ravens, where he won another Super Bowl ring, he returned to the Broncos. He played there until 2003. He then retired to become an NFL broadcaster.

Sharpe played in seven Pro Bowls and as of 2012, is the NFL's all-time receptions and yardage leader for a tight-end. He has been a commentator for the CBS Sports pregame show The NFL Today, including the Nextel Halftime Report and the Subway Postgame Show.

On February 6, 2011, Sharpe was inducted into the Pro Football Hall of Fame.

Secure Shannon Sharpe for Your Event

Based on your interest in Shannon Sharpe as a speaker or for a personal appearance, Direct Sportslink has provided you additional links below for other sports talent with similar appearance fees, speaker topics, and categories that match Shannon Sharpe.