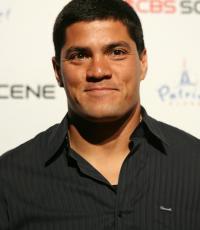 On February 16, 2005, just days after playing in the 2005 Pro Bowl, Bruschi was taken to a hospital with symptoms including temporary numbness, blurred vision, and headaches; Bruschi was diagnosed with a mild stroke. Bruschi suffered from partial paralysis and was admitted to Massachusetts General Hospital. After several months of rehabilitation working with Spaulding Rehabilitation Hospital in Boston, Bruschi announced he would sit out the 2005 NFL season.

On October 16, 2005, the Patriots announced that Bruschi had been medically cleared to resume playing football; he rejoined the team on the practice field three days later. The Patriots officially activated him on October 29, and he played the following night against the Buffalo Bills. Following the game, Bruschi was named AFC Defensive Player of the Week. Bruschi was named the 2005 NFL Comeback Player of the Year.

On the August 30, 2009, broadcast of Sunday Night Football, Al Michaels reported that Bruschi would announce his retirement after 13 seasons in the NFL the next day. Bruschi confirmed his retirement on August 31, 2009 at a press conference alongside New England Patriots head coach Bill Belichick and owner Robert Kraft. During this broadcast, Bruschi described how fulfilled he felt in completing his 13 years of playing football. He described how it felt to know that he had reached all of the goals he wanted to reach.

Bruschi retired from the Patriots in the 2009 preseason and later joined ESPN as an analyst.

Secure Tedy Bruschi for Your Event

Based on your interest in Tedy Bruschi as a speaker or for a personal appearance, Direct Sportslink has provided you additional links below for other sports talent with similar appearance fees, speaker topics, and categories that match Tedy Bruschi.