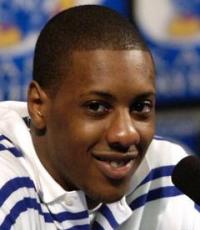 He helped the Kansas Jayhawks to their fifth NCAA title
Fee Range: $5,000 - $10,000
Secure Mario Chalmers
for Your Event

Chalmers attended Kansas University and was a standout player. During the 2006-7 season, Chalmers was named the Co-Defensive Player of the Year, the All Big 12-Third Team, the All-Big 12 Defensive Team, and was the Big 12 Tournament Most Outstanding Player.

Chalmers was drafted in 2008 by the Minnesota Timberwolves. The rights to Chalmers were later included in a trade with the Miami Heat.

On November 5, 2008 Chalmers set a new Miami Heat team record for steals with 9 in his fourth game in the NBA. Chalmers is on track to reach the Rookie Season Steal Record set by Dudley Bradley (Indiana, 1979-80) with 211 steals for the season.

Secure Mario Chalmers for Your Event

Based on your interest in Mario Chalmers as a speaker or for a personal appearance, Direct Sportslink has provided you additional links below for other sports talent with similar appearance fees, speaker topics, and categories that match Mario Chalmers.