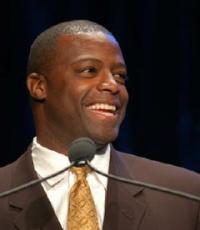 He is considered to be one of the greatest cornerbacks to ever play in the NFL; He was a member of two winning Super Bowl teams with the Washington Redskins
Fee Range: $10,000 - $20,000
Secure Darrell Green
for Your Event

Green was a cornerback for the Washington Redskins from 1983 to 2002, playing exclusively with the Redskins. He is considered to be one of the greater cornerbacks ever to play the game, maintaining a high level of play well into the twilight of his career. Amongst his honors are:

Green was with the Redskins for their victories in Super Bowls XXII and XXVI, and started in their loss to the Los Angeles Raiders in Super Bowl XVIII. Green retired in 2002 at the age of 42, the oldest Redskin.

A four-time winner of the NFL Fastest Man Competition, a leader in three Super Bowls and seven Pro Bowls. There is no doubt that Darrell Green performed exceptionally on the football field. However, it is his service to God and community outreach efforts of which he is most proud.

Through the Darrell Green Youth Life Foundation in Washington, D.C., Mr. Green reaches out to hurting and troubled young people with the love of Jesus Christ. The foundation's programs concentrate on elements like reverence for God, respect for fellow students and adults, and non-violent conflict resolution.

He was inducted into the Pro Football Hall of Fame in 2008.

Secure Darrell Green for Your Event

Based on your interest in Darrell Green as a speaker or for a personal appearance, Direct Sportslink has provided you additional links below for other sports talent with similar appearance fees, speaker topics, and categories that match Darrell Green.