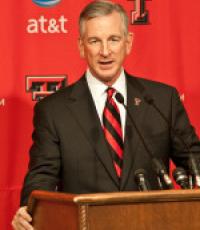 Tommy Tuberville served as the head football coach at the University of Mississippi from 1995 to 1998 and at Auburn University from 1999 until 2008, when he resigned from the position after completing his tenth season.

Tuberville was the 2004 recipient of the Walter Camp and Paul Bryant Coach of the Year awards after Auburn's 13–0 season, in which his team won the Southeastern Conference title and the Sugar Bowl, but was left out of the BCS National Championship Game. Tuberville earned his 100th career win on October 6, 2007 in a 35–7 victory over Vanderbilt. He is the first coach in Auburn football history to beat in-state rival Alabama six consecutive times.

In 2009, Tuberville worked as an analyst for Buster Sports and ESPN on various shows discussing the SEC and Top 25. He was named as the Texas Tech Red Raiders head football coach in 2010, In 2011, Tuberville was elected second vice president of the American Football Coaches Association. In 2012, he was named head coach of the University of Cincinnati.

Secure Tommy Tuberville for Your Event

Based on your interest in Tommy Tuberville as a speaker or for a personal appearance, Direct Sportslink has provided you additional links below for other sports talent with similar appearance fees, speaker topics, and categories that match Tommy Tuberville.