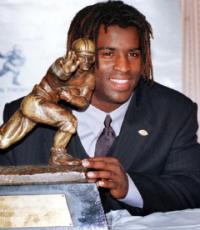 He was a standout running back for the Texas Longhorns, winning the 64th Heisman Trophy
Fee Range: $30,000 - $40,000
Secure Ricky Williams
for Your Event

As a running back for the University of Texas Longhorns, Williams held or shared 20 NCAA records, and became the NCAA Division I-A career rushing leader in 1998 with 6,279 yards. Williams broke the career rushing record during the annual rivalry game held the day after Thanksgiving between Texas and Texas A&M.

Williams also broke the NCAA Division I-A career rushing touchdowns and career scoring records in 1998 with 73 and 452 respectively, and rushed for 200 or more yards in twelve different games (an NCAA record he shares with Dayne and USC's Marcus Allen). Williams won the 64th Heisman Trophy, becoming the second Texas Longhorn to win this honor, joining Earl Campbell. Williams was sometimes known as the "Texas Tornado."

In his first season with the Miami Dolphins, Williams was the NFL's leading rusher and a Pro Bowler with 1,853 yards. After 2005, Williams played in the CFL for a year before returning to the Dolphins from 2007-2010. In 2011, Ricky signed on to play with the Ravens. On January 1, 2012, Williams surpassed 10,000 career rushing yards.

Secure Ricky Williams for Your Event

Based on your interest in Ricky Williams as a speaker or for a personal appearance, Direct Sportslink has provided you additional links below for other sports talent with similar appearance fees, speaker topics, and categories that match Ricky Williams.