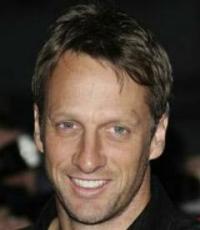 He is considered to be a pioneer in the sport of skateboarding
Fee Range: Contact Us
Secure Tony Hawk
for Your Event

A Tony Hawk personal appearance, Tony Hawk speaking engagement, or Tony Hawk endorsement will reflect well on your company. To hire Tony Hawk now for any corporate appearance, fundraiser, motivational speaker event, personal appearance, autograph signing, or website endorsement please contact our celebrity agents at 1-877-6-SPORTS. We will contact Tony Hawk or contact Tony Hawk's agent and provide you with the booking fees and availability immediately upon your request. Direct Sportslink is the only sports speakers bureau and talent booking agency based in the United States securing only sports talent for corporations, associations, and organizations for motivational speaking engagements, personal appearances, and endorsements. We are the premier sports celebrity booking agency and a sports celebrity procurement expert. Accordingly, we will provide you with any relevant Tony Hawk website information and booking agent details so that you can hire Tony Hawk for your next event.

Tony Hawk is one of the most successful and influential persons of modern vertical skateboarding. He is credited with the invention of many skateboard tricks including the Stalefish, Madonna, and over 80 others, but is most famous for being the first to land the 900 (two and a half rotations in the air before landing back on the pipe) during the televised 1999 X Games, for which he received an enormous amount of attention. It marked the next level of his rise to fame, solidifying his status as a household name. He retired from competitive skateboarding afterwards.

Secure Tony Hawk for Your Event

Based on your interest in Tony Hawk as a speaker or for a personal appearance, Direct Sportslink has provided you additional links below for other sports talent with similar appearance fees, speaker topics, and categories that match Tony Hawk.