He is one of the best linebackers to ever play in the NFL; He was named the 2005 NFL Defensive Player of the Year
Fee Range: Contact Us
Secure Brian Urlacher
for Your Event 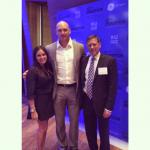 Direct Sportslink secured Chicago Bears legend Brian Urlacher for his personal appearance at GE Capital's "Appetite for Disruption" event. A former middle linebacker for the Bears, Urlacher was well known for disrupting offenses and imposing his will on the football field. His appearance included a moderated Q and A session which was a huge success followed by photos with GE Capital guests. To secure Brian Urlacher for any personal appearance, speaking engagement, or endorsement please contact a Direct Sportslink booking agent for his availability and immediate fee quote.

Brian Urlacher has been selected to numerous Pro Bowls and been named an All-Pro many times. He is just the fifth player in Bears team history to receive Pro Bowl selections in each of their first 4 NFL seasons (Rick Casares, Mike Ditka, Dick Butkus, and Gale Sayers.)

In 2011, Urlacher was awarded the Ed Block Courage Award for being a role model of inspiration, sportsmanship, and courage. He retired from the NFL in 2013.

Secure Brian Urlacher for Your Event

Based on your interest in Brian Urlacher as a speaker or for a personal appearance, Direct Sportslink has provided you additional links below for other sports talent with similar appearance fees, speaker topics, and categories that match Brian Urlacher.