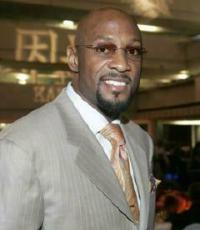 He was a member of the 2006 NBA Champion Miami Heat; He is a seven-time NBA All-Star
Fee Range: Contact Us
Secure Alonzo Mourning
for Your Event

Known simply as "Zo", Alonzo Mourning's tenacity on defense twice earned him NBA Defensive Player of the Year Award and perennially placed him on the NBA All-Defensive Team. His intensity had earned him the title "The Ultimate Warrior" amongst Miami Heat fans. He is applauded for making a comeback after undergoing a kidney transplant and years later winning his first NBA Championship with the Heat. He has also played for the Charlotte Hornets and New Jersey Nets.

Mourning played college basketball for the Georgetown University Hoyas. He led the nation in blocked shots his freshman year and was an All American his last year there. He was selected second overall in the 1992 NBA Draft by the Charlotte Hornets, behind Shaquille O'Neal. Mourning was named to the league's all-rookie team in 1993 after averaging 21.0 pts, 10.3 rebounds, and 3.47 blocks. He finished second to Shaquille O'Neal in rookie of the year voting. He posted the highest scoring average of any rookie in Hornets history. Mourning and O'Neal were the first NBA rookies since David Robinson in 1989-90 to average 20 or more points and 10-plus rebounds in their first seasons. Mourning shattered Charlotte's blocked-shots records, becoming the Hornets' all-time career leader in the 49th game of the season.

In 1997, Alonzo Mourning established Alonzo Mourning Charities Inc. to aid in the development of children and families living in at-risk situations and provides support and services that enhance the lives of youth of promise.

Prior to the start of the 2000-01 season, Mourning was diagnosed with focal segmental glomerulosclerosis, a disease of the kidneys, that had caused him to miss the first five months of that season. Even after the diagnosis, Mourning returned and played in the 2002 NBA All-Star Game and launched Zo's Fund for Life, a campaign which seeks to raise funds for research, education, and testing to fight focal glomerulosclerosis. Funds are allocated toward research for a cure, education for doctors and the general public, testing for early detection and a fund for those not able to afford medication.

The Miami Heat and Mourning won the elusive NBA Championship in the 2006 NBA Finals against the Dallas Mavericks 4 games to 2. Mourning averaged the most blocks in the NBA per 48 minutes with 5.46. During the 2007-08 season, he became the Heat's all-time leader in points scored.

In April 2010, Mourning was inducted into the Virginia Sports Hall of Fame in recognition of his outstanding high school, collegiate, and professional career as well as his commitment to volunteer service in the communities in which he has lived and worked throughout his life.

Secure Alonzo Mourning for Your Event

Based on your interest in Alonzo Mourning as a speaker or for a personal appearance, Direct Sportslink has provided you additional links below for other sports talent with similar appearance fees, speaker topics, and categories that match Alonzo Mourning.