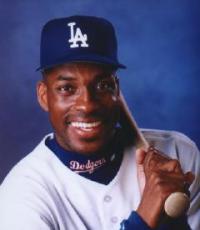 Frederick Stanley "Crime Dog" McGriff (born October 31, 1963 in Tampa, Florida) is a former left-handed Major League Baseball player who has starred for several teams since the mid-1980s, including the Toronto Blue Jays and Atlanta Braves. A power-hitting first baseman, the 5-time All-Star became, in 1992, the first player since the dead-ball era to lead both leagues in home runs. Although he has never hit more than 37 homers in a single season, he finished the 2003 campaign only 9 homers away from joining the exclusive company of those who have hit 500. He won a World Series title with the Atlanta Braves in 1995.

His nickname "Crime Dog" was bestowed on him by ESPN sportscaster Chris Berman, noted for his unusual and idiosyncratic player nicknames. The nickname is a play on McGruff, a cartoon dog created for American police to raise children's awareness on crime prevention. Unlike most of Berman's nicknames, the "Crime Dog" nickname entered into standard usage.

In 2004, the Tampa Bay Devil Rays re-signed McGriff in hopes of letting the veteran ballplayer hit 500 home runs. He had played from 1998 to 2001 with the Rays. Unfortunately, he ended up retiring during spring training of 2005. He retired with 493 home runs.

Secure Fred McGriff for Your Event

Based on your interest in Fred McGriff as a speaker or for a personal appearance, Direct Sportslink has provided you additional links below for other sports talent with similar appearance fees, speaker topics, and categories that match Fred McGriff.