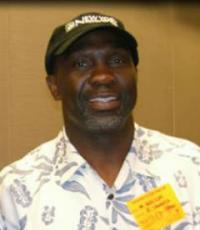 He is best known as the batter who hit the ball that went through Bill Buckner's legs to drive-in the winning Game 6 run in the 1986 World Series; He is inducted into the New York Mets Hall of Fame
Fee Range: $2,000 - $5,000
Secure Mookie Wilson
for Your Event

William Hayward "Mookie" Wilson is a former Major League Baseball outfielder who played with the New York Mets (1980-89) and Toronto Blue Jays (1989-91). He was a switch-hitter, known for his impressive speed and positive attitude. Fans would frequently chant "Mooooo-kie" in appreciation of him.

Wilson is the batter who, in Game 6 of the 1986 World Series, avoided being hit by a wild pitch, allowing the tying run to score in the bottom of the 10th. His ground ball later in the same at bat went through the legs of Red Sox first baseman Bill Buckner, allowing the winning run to score. Wilson was traded in 1989 to the Blue Jayas.

Secure Mookie Wilson for Your Event

Based on your interest in Mookie Wilson as a speaker or for a personal appearance, Direct Sportslink has provided you additional links below for other sports talent with similar appearance fees, speaker topics, and categories that match Mookie Wilson.