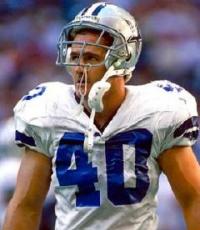 He is one of the most well liked and well known former Dallas Cowboys players having played his entire 15 year NFL career with the Dallas Cowboys
Fee Range: $5,000 - $10,000
Secure Bill Bates
for Your Event

Bill Bates is a former NFL safety who is one of only three players to play his entire 15 year NFL career with the Dallas Cowboys.

Bates attended Farragut High School in Knoxville, Tennessee. Bates attended the University of Tennessee where he was second team All-SEC as a junior and senior.

A remarkable story of an overachiever, Bates joined the Dallas Cowboys as an undrafted free agent, where he spent his entire career.

His autobiography is entitled Shoot for the Star. On August 18, 2005 Bates was inducted into the Knoxville Sports Hall of Fame. Bill Bates is a Christian speaker.

Secure Bill Bates for Your Event

Based on your interest in Bill Bates as a speaker or for a personal appearance, Direct Sportslink has provided you additional links below for other sports talent with similar appearance fees, speaker topics, and categories that match Bill Bates.