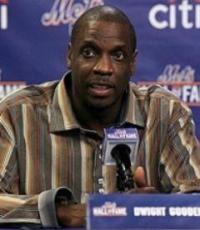 Direct Sportslink's client, the New York Food and Produce Show was looking for a New York celebrity to increase their trade show attendance. Dwight signed autographed photos and took pictures with the guests.

What a stroke of luck that our paths crossed when the Foundation was in need of help with our 2011 Yankee Stadium event. Direct Sportslink was sensitive and responsive to our needs and provided the expertise and support to make our evening a success. We especially appreciated the hands-on site support before and during the actual event. It was a pleasure working with you and I look forward to working with you in the future.

Dwight Eugene Gooden, nicknamed "Doc Gooden" or "Dr. K", was one of the most dominant and feared pitchers in the National League in the middle and late 1980s.

Gooden was drafted in the first round in 1982, the fifth player taken overall. He spent one season in the minors, in which he led the Class-A Carolina League in wins, strikeouts and ERA while playing for the Lynchburg Mets. Gooden had 300 strikeouts in 191 innings, a performance which convinced Triple-A Tidewater Tides manager, future New York Mets skipper Davey Johnson, that he was capable of making the unusual leap to the majors.

When he took the mound in the fifth inning on July 10, 1984, Gooden became the youngest player to appear in an All-Star Game. He complemented this distinction by striking out the side, AL batters: Lance Parrish, Chet Lemon, and Alvin Davis.

As a 19-year-old rookie, Gooden set the then-major league record for strikeouts per 9 innings, with 11.39, breaking Sam McDowell's record of 10.71 in 1965. He was voted the Rookie of The Year, giving the Mets two consecutive winners of that award (Darryl Strawberry had been the recipient in 1983).

In 1985, Gooden pitched one of the most statistically dominating single seasons in baseball history. Leading Major League Baseball with 24 wins, 268 strikeouts, and a 1.53 ERA (the second lowest in the Live Ball Era, trailing only Bob Gibson's 1.12 in 1968) Gooden earned the major leagues' pitching Triple Crown. He led the National League in complete games (16) and innings pitched (276 2/3). From his second start onward, Gooden's ERA never rose above 2.00. At age 20, he was the youngest pitcher of the last half-century to have an ERA+ above 200.

In another All-Star record pertaining to youth, in 1986 Gooden became the youngest pitcher to start an All-Star Game at 21 years, seven months and 30 days of age.

Gooden signed with the New York Yankees in 1996 as a free agent. After pitching poorly in April and nearly getting released, Gooden no-hit the Seattle Mariners 2-0 at Yankee Stadium on May 14.

Overall, Gooden ended his career with a record of 194-112. More than half of those wins came before age 25.

On August 1, 2010, he was officially inducted into the Mets Hall of Fame along with Darryl Strawberry, Frank Cashen, and Davey Johnson. He also threw out the ceremonial first pitch on the same day to Gary Carter. Dwight is active with personal appearances and corporate events.

Secure Dwight Gooden for Your Event

Based on your interest in Dwight Gooden as a speaker or for a personal appearance, Direct Sportslink has provided you additional links below for other sports talent with similar appearance fees, speaker topics, and categories that match Dwight Gooden.