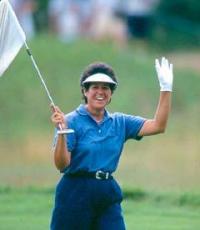 She is one of the most famous women in the history of golf; She is enshrined in the World Golf Hall of Fame
Fee Range: $40,000 - $50,000
Secure Nancy Lopez
for Your Event

Nancy Lopez is the first ever Latino woman to make it into the Golf Hall of Game. She started playing golf at the age of eight, and immediately took a liking to the sport. At the age of twelve, she won her first tournament, quite a feat for someone so young. She continued to play golf, and win tournaments, throughout her education.

She began college at University of Oklahoma, but left in 1977; long before getting a degree. She had decided that she wanted to play golf professionally. In her first year, she won an incredible number of five tournaments, setting the record for both men, and women rookie golfers alike. In her second year, she won 9 tournaments, one of them being a championship; this surprised many professional golfers, both because she was so new to the sport, and because she was a woman.

In 1987, Nancy Lopez was inducted into the golfer's hall of fame; the youngest person to ever be allowed in. In 1997, at the age of 40, she won her last tournament, the same tournament where she set the best score ever by a women golfer. Nancy Lopez did much to increase the popularity of women's golf, and also proved that women could do just as well as men, in any sport. She is definitely a role model for many people who have doubts in themselves. She was not only one of the first women to be successful in professional golf, but she was also in the Latino minority group.

Secure Nancy Lopez for Your Event

Based on your interest in Nancy Lopez as a speaker or for a personal appearance, Direct Sportslink has provided you additional links below for other sports talent with similar appearance fees, speaker topics, and categories that match Nancy Lopez.