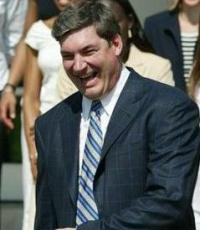 Bill Laimbeer was drafted by the Cleveland Cavaliers in 1979. In 1982, he was traded to the Detroit Pistons, where he would remain for the rest of his career. During his playing career, Laimbeer was one of the most notorious players in the NBA. While highly popular among Pistons' fans, Laimbeer was despised by opposing players and fans for committing hard fouls himself, while seeming to bait officials into calling fouls on opponents by flopping to the ground after slight contact. In the public eye, Laimbeer's reputation for physical play tended to overshadow his skills. Laimbeer was one of the top outside-shooting centers of his era, and was selected to the NBA All-Star Game on four occasions (1983, 1984, 1985 and 1987) and finished among the league leaders in rebounding several times, winning the rebound title in the 1985-86 season. Laimbeer started on the Pistons' 1989 and 1990 NBA championship team, that included such greats as Dennis Rodman and Joe Dumars.

Altogether, Laimbeer spent 14 seasons in the NBA, 12 of them with Detroit. Laimbeer became the 19th player in league history to amass more than 10,000 points and 10,000 rebounds, and his streak of 685 consecutive games played was at the time the fourth longest in league history. Laimbeer retired early in the 1993-94 season at age 36, and his jersey number (40) was eventually retired by the Pistons. At the time of his retirement, he was the franchise's all-time leader in career rebounds.

In the middle of the 2002 WNBA season, Laimbeer took over the head coaching position for the Detroit Shock. A year later, he led the franchise to its first WNBA championship and was named Coach of the Year that year. It marked the first time in WNBA history that a team other than Los Angeles or Houston won the title. He went on to win two more WNBA titles in 2006 and 2008 before accepting a NBA coaching coacing job.

Secure Bill Laimbeer for Your Event

Based on your interest in Bill Laimbeer as a speaker or for a personal appearance, Direct Sportslink has provided you additional links below for other sports talent with similar appearance fees, speaker topics, and categories that match Bill Laimbeer.