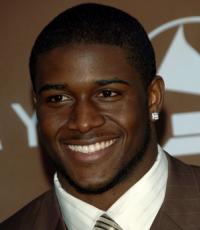 He won the Heisman Trophy; He was a member of the Super Bowl XLIV winning New Orleans Saints
Fee Range: $20,000 - $30,000
Secure Reggie Bush
for Your Event

Bush played college football for the University of Southern California (USC), earned All-American honors twice, and was recognized as the top college running back. The New Orleans Saints chose him with the second overall pick of the 2006 NFL Draft. Bush won a Super Bowl title with the Saints in 2010.

Bush was the cover athlete for NCAA Football 2007. He has been known for his work with fundraising organizations and chairites, especially with Diamond Empowerment Fund, visiting Botswana and South Africa and raising money for education there.

In March 2012, Reggie became a partner and spokesperson for skincare company Barc, makers of Bump Down Razor Bump Relief. In 2013, he signed with the Detroit Lions. He was released from the Lions in 2015.

Secure Reggie Bush for Your Event

Based on your interest in Reggie Bush as a speaker or for a personal appearance, Direct Sportslink has provided you additional links below for other sports talent with similar appearance fees, speaker topics, and categories that match Reggie Bush.