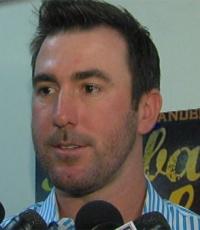 He was the 2011 AL MVP and Cy Young Award Winner
Fee Range: Contact Us
Secure Justin Verlander
for Your Event

In 2006, Verlander was named the American League Rookie of the Year as part of the Detroit Tigers. On June 12, 2007, he pitched a no-hitter, the first ever at Comerica Park against the Milwaukee Brewers. He pitched a second no-hitter against the Toronto Blue Jays on May 7, 2011, in Toronto, walking one and facing the minimum 27 batters.

On November 15, 2011, Verlander was named the 2011 AL Cy Young Award winner by a unanimous vote, becoming the first American League pitcher since 2006 to win the award in such a fashion. On November 21, 2011, Verlander was voted the AL MVP, winning with 280 points over Jacoby Ellsbury's 242, completing a sweep of the Cy Young Award and MVP, a rare feat for a pitcher in the modern era.

Secure Justin Verlander for Your Event

Based on your interest in Justin Verlander as a speaker or for a personal appearance, Direct Sportslink has provided you additional links below for other sports talent with similar appearance fees, speaker topics, and categories that match Justin Verlander.