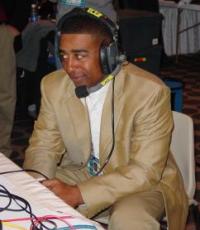 He is one of the greatest receivers to ever play in the NFL; He is a member of the Pro Football Hall of Fame
Fee Range: $20,000 - $30,000
Secure Cris Carter
for Your Event

Higher MPact was looking for a specific motivational speaker who was well known, respected and has faced their own adversitiy in life. Carter was ideal, telling his own personal story to the at risk youth and speaking later at a sponsored luncheon. Cris is a passionate, articulate, sincere speaker and his message resonated extremely well with the audience. A member of the Pro Football Hall of Fame, a Cris Carter appearance allows your guest access to one of the greatest wide receivers to ever play in the NFL.

Cris Carter offers a company, organization, or association many different angles as a keynote or motivational speaker. As an ordained minister, he is available for Christian Speaking Engagements. His ownership of a successful security company allows him the experience to talk about business challenges, motivation, leadership, and what it takes to be successful. Additionally, his challenges earlier in life with a substance abuse problem makes him an ideal candidate for speaking engagements with a focus on substance abuse, helping children, and positive youth messages.

Carter attended Middletown High School in Middletown, Ohio. He went on to star at the Ohio State University and was drafted by the Eagles in the 4th round of the 1987 NFL supplemental draft. After his years in Phildelphia, Carter was signed by the Vikings, became a 4 time All-Pro, and played in 8 straight Pro Bowls. When he left the Vikings after 2001, he held most of the team career receiving records. He briefly played for the Dolphins in 2002.

Since retiring from the NFL as one of the all time leaders in catches and touchdowns, Carter has been a host of HBO's Inside the NFL and ESPN's NFL shows. In 2013, he was elected to the Pro Football Hall of Fame.

Secure Cris Carter for Your Event

Based on your interest in Cris Carter as a speaker or for a personal appearance, Direct Sportslink has provided you additional links below for other sports talent with similar appearance fees, speaker topics, and categories that match Cris Carter.