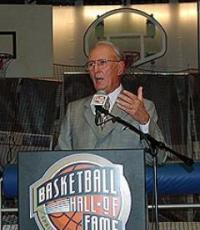 A Bob Cousy personal appearance, Bob Cousy speaking engagement, or Bob Cousy endorsement will reflect well on your company. To hire Bob Cousy now for any corporate appearance, fundraiser, motivational speaker event, personal appearance, autograph signing, or website endorsement please contact our celebrity agents at 1-877-6-SPORTS. We will contact Bob Cousy or contact Bob Cousy's agent and provide you with the booking fees and availability immediately upon your request. Direct Sportslink is the only sports speakers bureau and talent booking agency based in the United States securing only sports talent for corporations, associations, and organizations for motivational speaking engagements, personal appearances, and endorsements. We are the premier sports celebrity booking agency and a sports celebrity procurement expert. Accordingly, we will provide you with any relevant Bob Cousy website information and booking agent details so that you can hire Bob Cousy for your next event.

The son of French-born parents, Cousy didn't learn to speak English until he was seven years old. He fell in love with basketball when he was eleven and was a New York City all-star as a high school senior. At Holy Cross in Worcester, MA, he played for an NCAA championship team as a freshman in 1947 and was an All-American in his senior year before playing for the Boston Celtics in the NBA.

He was fourth in the NBA in assists as a rookie in 1950-51. After finishing second in assists the following season, Cousy led the NBA in that category eight years in a row. His 28 assists on February 27, 1959, against Minneapolis is an NBA record, since tied by Guy Rodgers, and he twice had a record 19 assists in a playoff game.

Cousy led the Celtics' fast break as they became one of the highest scoring teams in the NBA, but they had little success in the playoffs until Bill Russell joined them in 1956-57. Then they won six championships in seven years. Cousy was named the league's most valuable player in 1957, their first championship season.

Nicknamed the "Houdini of the Hardwood" and the "Mobile Magician," Cousy bewildered opponents with his dribbling and passing skills. Sportswriter Jimmy Cannon once described him as "a thrilling dwarf among the frustrated giants." His exceptional peripheral vision enabled him to spot open teammates and openings in the defense, and his larger than average hands enabled him to get the ball exactly where he wanted it to go.

When Cousy retired in 1963, he held an NBA record for most assists with 6,949, was second in games played with 917, and was fourth in scoring with 16,955 points. He averaged 18.4 points and 7.5 assists per game. In his 13 seasons, he was a first-team all-star ten times and on the second team twice. Cousy was one of the ten players named to the NBA's silver anniversary team in 1971.

After coaching Boston College to 114 wins, 38 losses, and five appearances in the National Invitation Tournament in six seasons, 1963-1969, Cousy took over the NBA's Cincinnati Royals, who became the Kansas City/Omaha Kings in 1972. He played briefly in 7 games during the 1969-70 season, scoring just 5 points.

Cousy left coaching after the 1973-74 season and became a television commentator for Celtics games.

Secure Bob Cousy for Your Event

Based on your interest in Bob Cousy as a speaker or for a personal appearance, Direct Sportslink has provided you additional links below for other sports talent with similar appearance fees, speaker topics, and categories that match Bob Cousy.