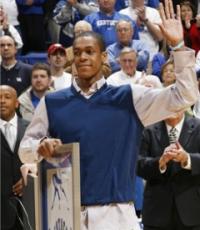 After committing to the University of Kentucky, Rajon Rondo led the Wildcats to several wins including clutch-shot victories against the University of Louisville, South Carolina and Central Florida. He was named to the SEC All-Freshmen Team. He set the UK single-season record for steals (totaling 87) his freshman year and made at least one steal in every game.

Following the 2005-06 NCAA season, Rondo announced he would forgo his final two seasons at Kentucky and enter the NBA draft. Rondo was drafted 21st overall by the Boston Celtics in the 2006 NBA Draft.

On April 20, 2008 Rondo made his playoff debut finishing with 15 points, nine assists and two steals, helping the Celtics to a convincing 104-81 victory over the Atlanta Hawks. In game 6 of the 2008 NBA Finals on June 17, 2008, Rondo had 6 steals, 8 assists, 7 rebounds and 21 points against the Los Angeles Lakers leading them in to a victory along with Kevin Garnett, Paul Pierce, and Ray Allen. Doc Rivers was the coach and Danny Ainge was the GM of the 2008 World Champion Celtics.

Secure Rajon Rondo for Your Event

Based on your interest in Rajon Rondo as a speaker or for a personal appearance, Direct Sportslink has provided you additional links below for other sports talent with similar appearance fees, speaker topics, and categories that match Rajon Rondo.