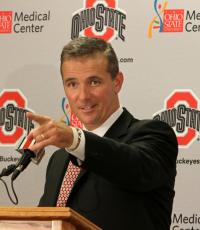 He is one of the greatest college football coaches ever
Fee Range: Contact Us
Secure Urban Meyer
for Your Event

Meyer was born in Toledo, Ohio, grew up in Ashtabula, Ohio, and attended the University of Cincinnati, where he played football.

During his time at the University of Florida, he coached the Gators to two BCS National Championship Game victories, during the 2006 and 2008 seasons. Meyer's winning percentage through the conclusion of the 2009 season (.842) was the highest among all active coaches with a minimum of five full seasons at a Football Bowl Subdivision (FBS) program. During his temporary retirement in 2011, he worked as a college football analyst for the television sports network ESPN. In 2014, he led the Buckeyes to their first Big Ten Conference title under his tenure as well as the program's eighth national championship. Meyer became the second coach (Nick Saban) to win a NCAA Football National Championship at two different schools.

Secure Urban Meyer for Your Event

Based on your interest in Urban Meyer as a speaker or for a personal appearance, Direct Sportslink has provided you additional links below for other sports talent with similar appearance fees, speaker topics, and categories that match Urban Meyer.