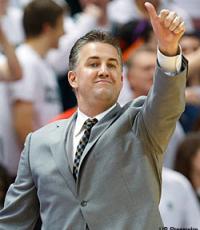 He is the current head basketball coach of the Purdue University Boilermakers
Fee Range: $10,000 - $20,000
Secure Matt Painter
for Your Event

Painter attended Purdue University as an undergraduate and played four seasons of basketball as a Boilermaker in the point guard position, where he helped lead the Boilermakers to three NCAA Tournaments and one NIT appearance. After graduation in 1993, Painter moved on to coaching basketball. His first year as a coach was an assistant coach position at Washington & Jefferson College. The next season, he became an assistant coach at Barton College. Painter then moved to Division I as an assistant coach at Eastern Illinois, where he also received his master's degree.

After three years at Eastern Illinois, he moved to Southern Illinois in 1998 as an assistant. Serving as an assistant coach for five seasons at SIU, Matt Painter stepped into his first NCAA Division I head coaching position after Bruce Weber took the head coaching job at Illinois for the 2003-04 season. Leading the Salukis to a 25-5 record and a berth in the 2004 NCAA Tournament, the team was ranked as high as #15 in the nation by the AP poll during the season. Painter was named the 2003-2004 Missouri Valley Conference Coach of the year.

In 2004, Painter was recruited by Purdue as the replacement for thier head coach. As part of a planned transition, Painter was named the Associate Head Coach for the 2004-2005 season. At the start of the 2005–06 season, Matt Painter took over as the head coach at his alma mater. Purdue was invited to the 2007 NCAA Tournament, Painter's second appearance as a head coach, and received a 9 seed. Over the next five years, Painter went 159-45 with two Sweet Sixteen appearances.

Secure Matt Painter for Your Event

Based on your interest in Matt Painter as a speaker or for a personal appearance, Direct Sportslink has provided you additional links below for other sports talent with similar appearance fees, speaker topics, and categories that match Matt Painter.