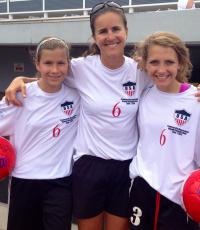 Chastain enrolled at the University of California, Berkeley in 1986, where she was awarded the Soccer America Freshmen Player Of The Year award. Soon after this she underwent reconstructive surgery on both her knees which caused her to miss much of the 1987 and 1988 seasons. In 1989, she transferred to Santa Clara University, leading their soccer team to two final four NCAA appearances before graduating in 1990.

Chastain first represented her country on April 18, 1991 against Mexico. She came off the bench to score five consecutive goals in a 12-0 United States win, in what was a qualifying game for the first FIFA Women's World Cup. Team USA went on to win the World Cup, staged in China, in the same year. Chastain next participated with the national team in the 1993 CONCACAF championships of New York, another tournament which the Americans won. Later in 1993 she joined the West Team, which won the gold medal at the Texas Olympic Festival.

Her first era as a member of the national team came to an end on August 8 of that year, but she made the team once again in 1996 and participated in the 1996 Atlanta Olympic Games, helping the Americans win the gold medal.

Chastain has been a broadcaster on soccer telecasts on two networks. She broadcast for NBC Sports during the 2008 Summer Olympics. Her work with ABC/ESPN has included MLS matches and being part of a rotation of studio commentators for the 2011 FIFA Women's World Cup.

Secure Brandi Chastain for Your Event

Based on your interest in Brandi Chastain as a speaker or for a personal appearance, Direct Sportslink has provided you additional links below for other sports talent with similar appearance fees, speaker topics, and categories that match Brandi Chastain.