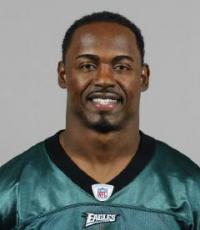 He was the leader of the Eagles defense for many years and was one of the most popular Philadelphia athletes in any sport
Fee Range: $10,000 - $20,000
Secure Brian Dawkins
for Your Event

A three-year starter at strong safety for Clemson University, Dawkins was chosen in the second round of the 1996 NFL Draft by the Philadelphia Eagles.

In 2008, Dawkins was named "Father of the Year" by the American Diabetes Association for his dedication to his family and community. Dawkins has also made generous contributions of $50,000 and $100,000 to Forest View Pop Warner and William M. Raines High School in Jacksonville, where he started his football career.

A nine-time Pro Bowl selection, Dawkins is a member of the Philadelphia Eagles 75th Anniversary Team, the NFL 2000s All-Decade Team and the 20/20 Club (20 sacks, 20 interceptions).

Secure Brian Dawkins for Your Event

Other After Dinner Talent Available

Based on your interest in Brian Dawkins as a speaker or for a personal appearance, Direct Sportslink has provided you additional links below for other sports talent with similar appearance fees, speaker topics, and categories that match Brian Dawkins.