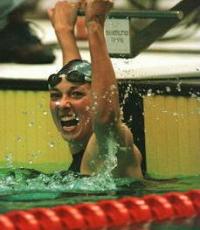 She is the winner of six gold medals; She was the first American woman to win four gold medals in one Olympics ('96); She was inducted into the Olympic and International Swimming Hall of Fame
Fee Range: Contact Us
Secure Amy Van Dyken
for Your Event

In the 2000 Olympic games, Amy won two more gold medals. She has won several World titles and set many American and World records.

Since retiring from swimming, she has had several speaking engagments all across the country, worked as a sideline reporter for the Seattle Seahawks and Denver Broncos, and been heavily involved with the Make-A-Wish Foundation. She was inducted into the Interanation Swimming Hall of Fame as the first woman American swimmer in 2007 and then in 2008, she was inducted into the Olympic Hall of Fame. From 2010-2011, Amy worked as a morning drive time host of 98.7 The Peak in Phoenix.

Based on your interest in Amy Van Dyken as a speaker or for a personal appearance, Direct Sportslink has provided you additional links below for other sports talent with similar appearance fees, speaker topics, and categories that match Amy Van Dyken.