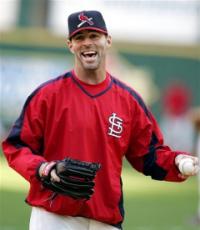 Early in his Major League career, the California Angels selected Edmonds in the seventh round of the 1988 draft. Edmonds has played for the California/Anaheim Angels, St. Louis Cardinals, San Diego Padres, Chicago Cubs, Milwaukee Brewers and Cincinnati Reds. He was affectionately known by Cardinal fans as "immy Baseball, Jimmy Ballgame, Lassie and as Hollywood.

Edmonds' fielding ability has earned him recognition from Major League coaches and managers, who voted him a Rawlings Gold Glove winner eight times in nine seasons from 1997 to 2005, most of them coming as a member of the St. Louis Cardinals. He has also hit 30 or more home runs in five seasons, while maintaining a .285 career batting average, and has knocked in over 1,140 runs in his career.

A defining moment of Edmonds' career came in the 2004 National League Championship Series, in which Edmonds hit an extra-inning home run to win Game 6. In Game 7, Edmonds made a spectacular defensive play in center, helping the Cardinals win the pennant. On Mother's Day, May 14, 2006, Edmonds was one of more than 50 hitters who brandished a pink bat to benefit the Breast Cancer Foundation. In 2006, Edmonds helped the St. Louis Cardinals win their first World Series title since 1982 while contributing 4 RBI. Edmonds, along with Albert Pujols and Scott Rolen, earned the nickname MV3 for their phenomenal 2004 seasons.

Edmonds officially announced his retirement from baseball on February 18, 2011.

Secure Jim Edmonds for Your Event

Based on your interest in Jim Edmonds as a speaker or for a personal appearance, Direct Sportslink has provided you additional links below for other sports talent with similar appearance fees, speaker topics, and categories that match Jim Edmonds.