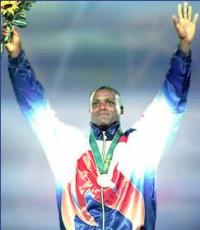 Direct Sportslink secured Olympic Gold Medalists Carl Lewis and Ryan Lochte for Convergys' national sales kickoff in Orlando, Florida. Carl and Ryan both met VIP guests, took photos with the attendees and signed autographs for everyone in attendance. It was an amazing night with two Olympic heros in the same room for Convergys.

In 1980, Carl was selected for the US Olympic team, but the American boycott of the Games in Moscow delayed Lewis' debut. He received the 1981 James E. Sullivan Award as the top amateur athlete in the United States.

The following years, Lewis set season's-best performances in the  100 m and long jump. At the inaugural World Championships in 1983, Lewis won his first major titles, achieving victory in the 100 m, long jump and the 4 x 100 m relay events.

This made him a great favorite for success at the 1984 Los Angeles Olympics. Also entering the 200 m, Lewis sought to equal Jesse Owens' performance of 1936 by winning these four events, which he did. He won two more gold medals at the 1988 Olympics in Seoul, South Korea. In the 1992 Summer Olympics in Barcelona, Lewis won his third consecutive Olympic long jump title. Lewis also ran the last leg of the American 4 x 100 m team.

In 1996 - aged 35 - he made a strong comeback in the long jump event, and made a bid for a fourth consecutive Olympic title. Lewis succeeded with remarkable ease, becoming at the time, only the third Olympian to win four consecutive titles in an individual event.

Secure Carl Lewis for Your Event

Based on your interest in Carl Lewis as a speaker or for a personal appearance, Direct Sportslink has provided you additional links below for other sports talent with similar appearance fees, speaker topics, and categories that match Carl Lewis.