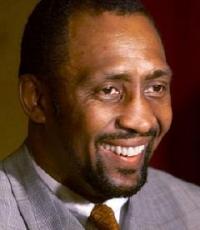 Hearns won his first championship by KO'ing the legendary Pipino Cuevas in the second round of their fight in 1980. After defending the WBC welterweight championship successfully three times, he suffered his first career defeat at the hands of Sugar Ray Leonard in 1981.

Despite having a solid career, Hearns was frequently overshadowed from his losses to Sugar Ray Leonard and Marvelous Marvin Hagler, pitting better than stellar performances against both. In his 1981 welterweight unification fight against Leonard, Hearns was ahead on the scorecards before losing by TKO. Four years later, Hearns was pitted against Hagler, he was KO'ed in the third round of a fight many observers called "the greatest three rounds of boxing in history".

Secure Thomas Hearns for Your Event

Based on your interest in Thomas Hearns as a speaker or for a personal appearance, Direct Sportslink has provided you additional links below for other sports talent with similar appearance fees, speaker topics, and categories that match Thomas Hearns.