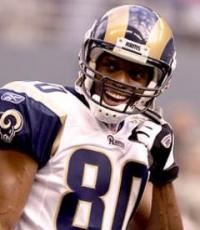 As a wide receiver for the Tigers of Memphis, Bruce finished his career with 113 receptions for 1,586 yards (14.04 yards per rec. avg.) and fifteen touchdowns. He was the first of three second-round draft selections (33rd overall) by the Rams in 1994 NFL Draft.

One of the best receivers in the National Football League, he made one of most famous plays in illustrious history of Rams' football, catching 73-yard touchdown pass from QB Kurt Warner with under two minutes to play in the game to give the St. Louis Rams a 23-16 victory in Super Bowl XXXIV.

At the time of his retirement, Bruce was the Rams' career leader in receptions, receiving yards, 100-yard receiving games, 1,000-yard seasons, and touchdown receptions.

He was the Rams' spokesman for the United Way in 1996.  Bruce was the 1998 Rams Spirit Good Sport/Man of the Year and the 1997 Rams True Value Man of the Year, recognizing his sportsmanship and community involvement.

Bruce serves on the Board of Directors for Childhaven, an educational facility serving children with behavior and communication disorders.  Throughout the years with Childhaven, Bruce has donated $25,000 through endorsements and performance donations. In 1998 and 1999, Bruce donated 80 turkeys to local organizations to feed the hungry for Thanksgiving.  He adopted Bruce Elementary in St. Louis and makes frequent visits to school and annually celebrates his birthday with the students.

Secure Isaac Bruce for Your Event

Based on your interest in Isaac Bruce as a speaker or for a personal appearance, Direct Sportslink has provided you additional links below for other sports talent with similar appearance fees, speaker topics, and categories that match Isaac Bruce.