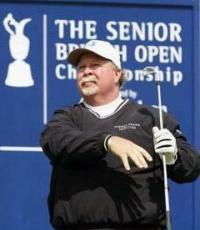 Stadler displayed early skill at golf, and won the 1973 U.S. Amateur, and attended the University of Southern California where he became a two-time All-American.

Very popular with the galleries, Stadler is known as "The Walrus" among golf circles. He turned professional in 1975, and won the 1982 Masters. He won his first two PGA Tour wins in 1980, at the Bob Hope Desert Classic and the Greater Greensboro Open. He also won four more tournaments in 1982, including the first of his two World Series of Golf titles.

Stadler began playing the Champions Tour upon becoming eligible in June 2003, and was the leading money winner in his first full year on that tour in 2004.

Secure Craig Stadler for Your Event

Based on your interest in Craig Stadler as a speaker or for a personal appearance, Direct Sportslink has provided you additional links below for other sports talent with similar appearance fees, speaker topics, and categories that match Craig Stadler.