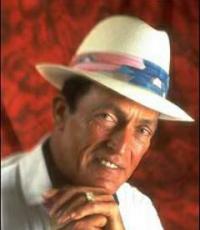 Juan "Chi-Chi" RodríguezRodríguez was born into a poor family, one of six siblings. His father used to earn only $18 a week as a laborer and cattle handler. When Rodríguez was only seven years old, he would help the family by earning money as a water carrier on a sugar plantation. One day Juan wandered off, as many children his age do, but into a golf course. When he saw that the caddies were earning more money than him, he decided to become a caddy himself.

At first, Rodríguez used to put his hat over the hole whenever he made a birdie or eagle. After he heard that other golfers were complaining about his little act, he decided to try something new. Juan developed his signature "toreador dance", where he would make believe that the birdie was a "bull" and that his putter was a "sword" and he would terminate the "bull". Rodríguez represented Puerto Rico on 12 World Cup teams. In 1986, he won the Hispanic Recognition Award. In 1988, he was named Replica's Hispanic Man of the Year.

He was the first player on the PGA Senior Tour to win the same event in three consecutive years. He set a tour record with eight consecutive birdies en route to a win at the 1987 Silver Page Classic.

On one occasion Rodríguez had a brief encounter with Mother Teresa. He considers that moment as the greatest moment in his life. This encounter inspired him to help others. Rodríguez established the "Chi-Chi Rodríguez Youth Foundation",  to instill self-esteem in young people who are victims of abuse, have experienced minor brushes with the law, or have suffered other hardships.

Based on your interest in Chi Chi Rodriguez as a speaker or for a personal appearance, Direct Sportslink has provided you additional links below for other sports talent with similar appearance fees, speaker topics, and categories that match Chi Chi Rodriguez.