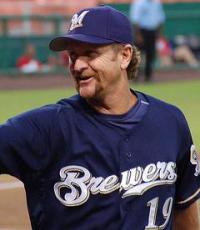 He was a three-time All-Star and twice was awarded Most Valuable Player; He was inducted into the Major League Baseball Hall of Fame in 1999
Fee Range: $20,000 - $30,000
Secure Robin Yount
for Your Event

An All-Star in 1980, 1982 and 1983, Yount collected more hits in the decade of the 1980s than any other player (1731). 1982 proved his finest statistical season, as he won his first MVP award and helped lead the Brewers to their only World Series appearance, where he became the only player to collect four hits in each of two World Series games. His career highs of 29 home runs, a .331 batting average, and 114 RBIs were all products of the 1982 season; he also stole 14 bases, had 210 hits, and won a Gold Glove.

In 1989, Yount collected a second MVP award, making him only the third player at the time to win MVPs at two positions. He was also the first AL player to win multiple MVP's since the early 1960s.

Yount collected his 3,000th career hit in 1992 and was elected to the Baseball Hall of Fame in 1999, his first year of eligibility. That same year, he was named as a finalist for the Major League Baseball All-Century Team.

Secure Robin Yount for Your Event

Based on your interest in Robin Yount as a speaker or for a personal appearance, Direct Sportslink has provided you additional links below for other sports talent with similar appearance fees, speaker topics, and categories that match Robin Yount.