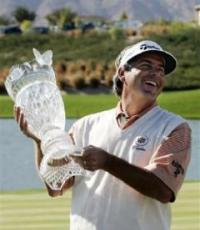 He became the first American golfer to reach # 1 in the World Rankings; He has been a member of multiple Ryder Cup teams
Fee Range: $50,000 - $75,000
Secure Fred Couples
for Your Event

Fred Couples first played golf on Seattle's public golf courses, and attended the University of Houston, where he roomed with Blaine McCallister and CBS television broadcaster Jim Nantz. His first PGA Tour victory came at the 1983 Kemper Open. He has amassed 15 total PGA victories, including the Players Championship twice and The Masters Tournament in 1992, his only Major victory. He has been named the PGA Tour Player of the Year twice, in 1991 and 1992 and has been named to the Ryder Cup team five times (1989, 1991, 1993, 1995 and 1997). He spent 16 weeks at number 1 in the Official World Golf Rankings.

He became the first American player to reach No.1 in the World Rankings.

In 2005 Fred sank a crucial putt in the President's Cup, securing an unlikely 1-shot victory over the International team's best player, Vijay Singh. This match proved to be pivotal in the contest.

Couples led the second round of the 2012 Masters Tournament looking to become the oldest person to win a major. He finished tied for 12th.

Secure Fred Couples for Your Event

Based on your interest in Fred Couples as a speaker or for a personal appearance, Direct Sportslink has provided you additional links below for other sports talent with similar appearance fees, speaker topics, and categories that match Fred Couples.