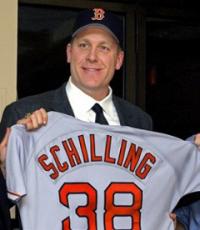 He was a key member of four different World Series Championships on three different teams
Fee Range: $20,000 - $30,000
Secure Curt Schilling
for Your Event

Curt Schilling is a former Major League Baseball right-handed starting pitcher. He helped lead the Philadelphia Phillies to the World Series in 1993 and has won World Series championships in 2001 with the Arizona Diamondbacks and in 2004 and 2007 with the Boston Red Sox. He was the only pitcher in Major League History to compete in a World Series game in his 20's, 30's and 40's. Schilling retired with a career postseason record of 11-2, which is equivalent to a .846 postseason winning percentage, at the time of his retirement it was a major league record among pitchers with at least 10 decisions.

On October 19, 2004 Schilling won Game 6 of the 2004 American League Championship Series against the New York Yankees. Notably, he won this game playing on an injured ankle. These injuries were so acute that by the end of his performance that day his white sock was soaked with blood. The win forced a Game 7, making the Red Sox the first team in MLB history to come back from a three-games-to-none deficit. The Red Sox would go on to win Game 7 and the ALCS and make their first World Series appearance since 1986. Schilling pitched (and won) Game 2 of the 2004 World Series for the Red Sox against the St. Louis Cardinals. In both series, he had to have the tendon in his right ankle stabilized repeatedly, in what has become known as the Schilling Tendon Procedure, after the tendon sheath was torn during his Game 1 ALDS appearance against the Los Angeles Angels of Anaheim. As in Game 6 of the ALCS, Schilling's sock was soaked with blood from the sutures used in this medical procedure, but he still managed to pitch seven strong innings, giving up one run on four hits, and striking out four. This second bloody sock was placed in the Baseball Hall of Fame after Boston's victory over St. Louis in the World Series. A 4-game sweep of the World Series gave Boston its first World Series championship since 1918.

On March 23, 2009, Schilling officially announced his retirement from professional baseball after 20 seasons. Schilling ended his career with a 216-146 record, 3.46 ERA and 3116 strikeouts, 15th-most in MLB history. At the time of his retirement, Schilling held the major league record for consecutive starts pitched without allowing an unearned run. He has been a baseball analyst for ESPN and has written many baseball articles for different magazines.

In 2010, Schilling was selected as the commencment speaker for Worchester Polytechnic Institute.

Secure Curt Schilling for Your Event

Based on your interest in Curt Schilling as a speaker or for a personal appearance, Direct Sportslink has provided you additional links below for other sports talent with similar appearance fees, speaker topics, and categories that match Curt Schilling.