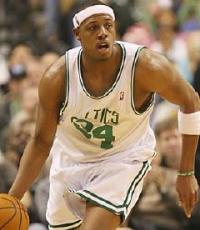 Pierce, who was raised in a suburb of Los Angeles, California, was the star of his Inglewood High School, playing basketball his junior and senior years. He was cut from the varsity team his freshman and sophomore years, and even thought about transferring schools, but eventually decided to work harder and keep trying. He also participated in the 1995 McDonald's All-American Game alongside future NBA stars Kevin Garnett, Stephon Marbury, Vince Carter, and Antawn Jamison, and was a contestant in the game's Slam Dunk Contest, which was won by Carter.

Pierce averaged 16.4 points and 6.3 rebounds per game in his three seasons at the University of Kansas and earned MVP honors in the Big 12 Conference Tournament in both 1997 and 1998. Pierce played for Hall of Fame coach Roy Williams at Kansas. He entered the NBA Draft after his junior year and was selected with the 10th overall pick in the first round of the 1998 NBA Draft by the Boston Celtics.

Along with Kevin Garnett, Rajon Rondo and Ray Allen, he led the Boston Celtics to the 2007-2008 NBA Championship. the team was coached by Glenn "Doc" Rivers. He was traded to the Brooklyn Nets in 2013.

Secure Paul Pierce for Your Event

Based on your interest in Paul Pierce as a speaker or for a personal appearance, Direct Sportslink has provided you additional links below for other sports talent with similar appearance fees, speaker topics, and categories that match Paul Pierce.