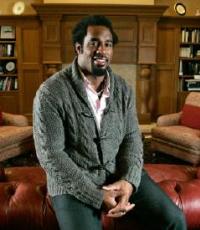 He has hosted DHANI TACKLES THE GLOBE on the Travel Channel; He was a standout linebacker at Michigan and played eleven season in the NFL
Fee Range: $10,000 - $20,000
Secure Dhani Jones
for Your Event

DHANI JONES - OFF THE FIELD

Warrior and Bowtie Expert. Linebacker, Poet and Jock: Dhani Jones understands the extremes of life. As a member of the Cincinnati Bengals, Jones would ride his bike to the stadium for practices & games, has worked with Al Gore's climate change initiative and is on Feeding America's entertainment council to end hunger.

The well-spoken Jones, hosted DHANI TACKLES THE GLOBE. By actively participating in some of the most beloved national pastimes from around the world, Dhani discovers that sports have the universal ability to open a window into a culture; define a destination; and unlock a common passion in people that is as different as it is familiar. His huge love for living, authority on sport and understanding of the big issues of climate change make Dhani a key player in sport and sustainability. No wonder that in Hindi, "Dhani" means thinking man.

In 2005, he began www.fivestarties.com. Known for wearing his signature bow tie, he designed his own modern line of fun and high quality men's accessories.

Other interests include: Art/Photography, Poetry and Reading, and Music.

At the University of Michigan, Dhani Jones was a three time All-Big Ten honoree. As a sophomore, Jones started nine games at linebacker and finished second on the team with 90 tackles and six sacks, playing alongside Heisman Trophy winner Charles Woodson on Michigan's 1997 national champion squad. As a junior in 1998, he started at linebacker and finished with 72 tackles. Lining up at strong side linebacker as a senior in 1999, he finished second on the team with 81 tackles.

After being drafted by the New York Giants in 2000, the Philadelphia Eagles acquired him from the Giants in 2004. He started in Super Bowl XXXIX. After a stint with the Saints, he signed with the Bengals in 2007 and retired in 2010.

Secure Dhani Jones for Your Event

Based on your interest in Dhani Jones as a speaker or for a personal appearance, Direct Sportslink has provided you additional links below for other sports talent with similar appearance fees, speaker topics, and categories that match Dhani Jones.