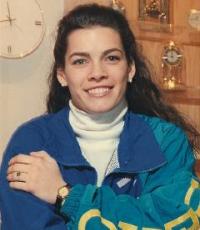 She is a two-time Olympic figure skating medalist; She is known for being the victim of Tonya Harding's plot to hurt her before the 1994 Winter Olympic games
Fee Range: $10,000 - $20,000
Secure Nancy Kerrigan
for Your Event

Kerrigan first came to prominence when the United States team scored a medal sweep in the ladies' event in the 1991 World Figure Skating Championships; Kerrigan received the bronze medal behind Kristi Yamaguchi and Tonya Harding. Her career seemed headed steadily upward as she received a bronze medal in the 1992 Winter Olympics, and the silver medal at the 1992 World Championships. The following season she became United States Champion and was leading the World Championship in Prague after the short program when a disastrous long program resulted in her tumbling to fifth in the standings and a surprising win by Oksana Baiul.

She captured national attention beyond the skating world on January 6, 1994, when she was clubbed in the knee by Shane Stant, who was hired to assault her by Tonya Harding's ex-husband Jeff Gillooly and friend Shawn Eckhardt.

Just a month after the attack, Kerrigan went on to win the silver medal in the 1994 Winter Olympics in Lillehammer (second to Oksana Baiul), with what was undoubtedly the best performance of her career. The decision between Kerrigan and Baiul was close and somewhat controversial, and remains so to this day.

Kerrigan retired from active competition after the Olympics. She has appeared in a variety of ice skating shows since turning professional. She also created The Nancy Kerrigan Foundation to raise awareness and support for the vision impaired.

Secure Nancy Kerrigan for Your Event

Based on your interest in Nancy Kerrigan as a speaker or for a personal appearance, Direct Sportslink has provided you additional links below for other sports talent with similar appearance fees, speaker topics, and categories that match Nancy Kerrigan.