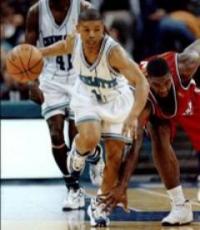 Direct Sportslink has secured numerous former NBA basketball players for appearances, speaking engagements, and fun basketball related drills for Cross Training Basketball Camp. Muggsy was the latest in a long line of talent we have secured to thrill the kids with his passion, stories, and motivation. To hire Muggsy Bopgues for any personal appearance, speaking engagement, or endorsement please contact a Direct Sportslink boking agent. We work directly with Muggsy Bogues to determine his appearance fee and availability.

Direct Sportslink really helped us out of a jam. Our speaker for an awards banquet cancelled at the last minute. Our theme for the banquet was basketball so not only were we in need of a replacement but the sports speaker needed to be in the professional basketball field. Direct Sportslink saved us - not only did they come through with a well-known basketball player, but they gave us several options. Our employees couldn't stop raving about Muggsy Bogues. Direct Sportslink made it easy to do business at the last minute. Their professionalism and willingness to help us during a pinch is invaluable. We won't hesitate to do business with them again.

Tyrone Curtis "Muggsy" Bogues played for four teams during his 14-season career in the National Basketball Association (NBA), but is best known for his stint with the Charlotte Hornets. He is the smallest player in NBA history, standing 5'3" and weighing 136 pounds.

Bogues played at Dunbar High School in Baltimore, where he was a teammate of future NBA players David Wingate, Reggie Williams, and Reggie Lewis. He went on to play four years at Wake Forest.

Bogues was drafted 12th in the talent-laden 1987 NBA Draft by the Washington Bullets, and was part of a draft class that also included David Robinson, Reggie Miller, Scottie Pippen and Kevin Johnson.

The Miami Heat and Charlotte Hornets were set to enter the NBA for the 1988-89 season, and on June 22, 1988 Bogues was selected by the Hornets in the expansion draft. Bogues spent ten years in Charlotte as the Hornets, led by Alonzo Mourning and Larry Johnson, became one of the most popular teams in the NBA and a perennial playoff contender. Charlotte Hornets jerseys were worn by children all over United States and even in Australia, and Bogues' jersey was right up there in popularity with Mourning's and Johnson's.

Two games into the 1997-98 NBA season, Bogues' Hornets career ended when he was traded, along with Tony Delk, to the Golden State Warriors in exchange for B.J. Armstrong. Bogues played two seasons with the Warriors, and then signed as a free agent with the Toronto Raptors, where he would essentially conclude his career. Although he was later traded to the New York Knicks and Dallas Mavericks, he did not play a single game for either franchise. He has coached the Charlotte WNBA team and lives in the Charlotte area.

Secure Muggsy Bogues for Your Event

Based on your interest in Muggsy Bogues as a speaker or for a personal appearance, Direct Sportslink has provided you additional links below for other sports talent with similar appearance fees, speaker topics, and categories that match Muggsy Bogues.