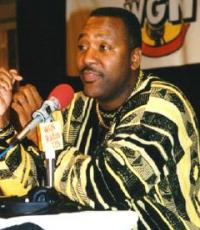 He is most famous for his game winning home-run in the 1993 World Series; He won two World Series Championships with the Toronto Blue Jays
Fee Range: $10,000 - $20,000
Secure Joe Carter
for Your Event

Carter is a former right fielder in Major League Baseball who played from 1983 to 1997, most famous for hitting a home run to end the 1993 World Series, with the Toronto Blue Jays trailing 6-5 to the Philadelphia Phillies, just two outs away from a seventh game.

Carter first reached the majors in 1983 with the Chicago Cubs but was then traded to the Cleveland Indians, where he blossomed into a star. Carter emerged as a prolific power hitter, hitting as many as 35 home runs in a season and regularly driving in 100 or more RBI. He was also a very good baserunner, stealing 20-30 bases a year with a high rate of success, and a good defensive outfielder.

Some of his best years were in Canada, helping the Blue Jays win the 1991 division title, hitting the game-winning single that clinched the AL East. In 1992, he helped the Jays win their first World Series championship, the first ever won by a Canadian-based team. Carter himself hit two home runs and made the final out of the Series, taking a throw to first base from reliever Mike Timlin to nab Otis Nixon of the Atlanta Braves.

In 1993, the Blue Jays again reached the World Series, facing the Philadelphia Phillies. In Game 6, with the Blue Jays leading three games to two, Carter came to bat in the bottom of the ninth inning with the Blue Jays losing 6-5 and Rickey Henderson and Paul Molitor on base. On a 2-2 count, Carter hit a three-run home run off Phillies pitcher Mitch Williams to win the World Series, only the second time a World Series has ended with a home run (the other being in 1960, when Bill Mazeroski did it), and the only time the home run has been hit by a player whose team was losing.

Carter was named to five All-Star teams. In his career he hit 396 home runs and drove in 1,445 RBI. He drove in 100 runs in a season ten times, including the 1994 year, which was cut short due to the strike that happened about 110 games into the year.

Carter was inducted into the Canadian Baseball Hall of Fame.

Carter was honored by the Cleveland Indians in 2012 with a bobblehead day.

Secure Joe Carter for Your Event

Based on your interest in Joe Carter as a speaker or for a personal appearance, Direct Sportslink has provided you additional links below for other sports talent with similar appearance fees, speaker topics, and categories that match Joe Carter.