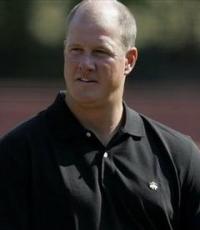 He is well-known for his baseball success despite being born without a right hand; He threw a no-hitter for the New York Yankees in 1993; He was elected into the College Baseball Hall of Fame in 2007
Fee Range: $10,000 - $20,000
Secure Jim Abbott
for Your Event

Abbott was born in Southfield, Michigan without a right hand. He led the Michigan Wolverines to two Big Ten championships. In 1987, he won the James E. Sullivan Award as the top amateur athlete in the United States, becoming the first baseball pitcher to win that award. The same year Abbott pitched for the United States at the Pan-American Games, winning a silver medal. He pitched the final game in the '88 Summer Olympics, winning gold for the United States.

No stranger to adversity, Jim Abbott's story is a true inspiration to anyone. Being born without a right hand, he played major league baseball without playing in the minor leagues first. His MLB career was highlighted by a no-hitter in 1993 while pitching for the New York Yankees. As a motivational speaker he will touch on a number of topics that center around overcoming adversity and adapting to be a success.

Jim Abbott has made numerous appearances over the years and is available for corporate hospitality events, fundraisers, and other guest appearances.

The Department of Labor's Office of Disability Employment Policy (ODEP) has endorsed the idea of working with Jim Abbott on several initiatives encouraging businesses to hire people with disabilities. Jim, ODEP and Major League Baseball combined efforts to help raise awareness about the talent people with disabilities have to offer. If you are looking for a sports celebrity for an endorsement involving, a disability, adversity, or overcoming the odds Jim Abbott would be an ideal spokesperson.

Secure Jim Abbott for Your Event

Based on your interest in Jim Abbott as a speaker or for a personal appearance, Direct Sportslink has provided you additional links below for other sports talent with similar appearance fees, speaker topics, and categories that match Jim Abbott.