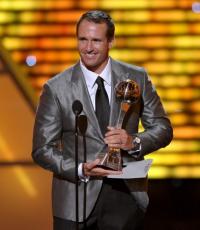 He was the Super Bowl XLIV MVP; He was named the AP Male Athlete of the Year in 2010.
Fee Range: Contact Us
Secure Drew Brees
for Your Event

Brees was drafted by the San Diego Chargers in the second round of the 2001 NFL Draft. He played college football at Purdue University.

Brees has been selected to several Pro Bowls in his career – with the Chargers and the Saints. He was the NFL's Comeback Player of the Year in 2004, the National Football League Offensive Player of the Year in 2008 & 2011, and the MVP of Super Bowl XLIV. During his Super Bowl victory in 2009, Brees tied a record for most completions in a Super Bowl with 32. He was also selected by voters to appear on the cover of EA Sports' Madden NFL 11. Sports Illustrated named him as its 2010 Sportsman of the Year.

Brees has held the NFL single-season record for most passing yards in a season by a quarterback, with 5,476 yards, which he accomplished during the 2011 season. That year Brees also set NFL records for highest completion percentage in a season – 71.2%, most 300+ yard passing games in a season – 13, and most completions in a season – 468.

Drew and his wife Brittany's Brees Dream Foundation announced a partnership in 2007 with Operation Kids to rebuild and restore and recreate academic and athletic facilities, parks and playgrounds, after-school programs, mentoring programs for the intellectually disabled, neighborhood revitalization projects and child care facilities in New Orleans. In June of 2010, President Obama appointed Brees to co-chair the newly renamed  President's Council on Fitness, Sports and Nutrition.

Secure Drew Brees for Your Event

Based on your interest in Drew Brees as a speaker or for a personal appearance, Direct Sportslink has provided you additional links below for other sports talent with similar appearance fees, speaker topics, and categories that match Drew Brees.