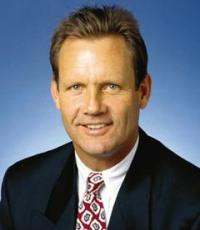 Brett, a left-handed hitter joined the Kansas City Royals briefly in 1973 and took over the third base job the following season. In 1975, he led the league with 195 hits and 13 triples. The following year, he won his first batting title with a .333 average and again led with 215 hits and 14 triples.

Brett was named to the AL All-Star team 11 years in a row, from 1976 through 1986, and again in 1988. An excellent situation hitter who could go to the opposite field when a single was needed, pull the pull when a home run was needed, and drive the ball into the air when a sacrifice fly was needed, Brett starred in post-season play.

Secure George Brett for Your Event

Based on your interest in George Brett as a speaker or for a personal appearance, Direct Sportslink has provided you additional links below for other sports talent with similar appearance fees, speaker topics, and categories that match George Brett.