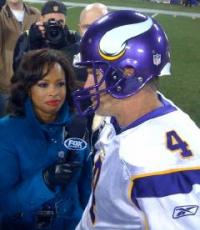 She is best known for her NFL broadcasting experience
Fee Range: $2,000 - $5,000
Secure Pam Oliver
for Your Event

Direct Sporslink secured Dwight Gooden and Pam Oliver for Notre Dame's FIRE event - a panel discussion on Race in Sports. Pam Oliver's appearance and participation was well received. Her exposure to athletes of all race in sports offered a unigue angle from the sports broadcasting perspective and a behind the scenes look from her viewpoint.

We worked with Direct Sportslink to hire Pam Oliver for the University of Notre Dame’s, “Race and Sport in American Culture" program. Pam is a very personable and passionate sports analyst. Her character and her shared experiences were a terrific boon to our program and our series. We appreciate the ease with which we were able to make this program a tremendous success with Direct Sportslink.

If you are looking for a sports speaker who has "the inside scoop", Pam Oliver is ideal. She makes a living out of talking to coaches and players before she reports the news to you, the sports fan. Outgoing and well spoken, Pam would be great for any type of corporate personal appearance, particularly a Q and A session involving the NFL or NBA.

As a teenager, Oliver lived in Niceville, Florida, where she attended Niceville High School. In high school, Oliver excelled in tennis, basketball, and track and field. After graduating, Oliver enrolled at Florida A&M University, where she continued her track endeavors, becoming a college All-American in both the 400-meter and the mile relay. Oliver earned a bachelor's degree in broadcast journalism and graduated in 1984.

Pam is the recipient of the 2004 Ebony Magazine Outstanding Woman in Journalism award.

Secure Pam Oliver for Your Event

Based on your interest in Pam Oliver as a speaker or for a personal appearance, Direct Sportslink has provided you additional links below for other sports talent with similar appearance fees, speaker topics, and categories that match Pam Oliver.