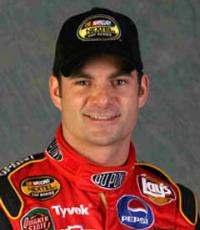 He is one of the most accomplished NASCAR drivers ever
Fee Range: Contact Us
Secure Jeff Gordon
for Your Event

Gordon was a racing child prodigy. Gordon began racing when he was about four years old.

In 1993, Gordon raced a full season in the Winston Cup for Hendrick Motorsports, he won the Rookie of the Year award. Finally, in 1995, at the age of 24, Gordon won the first of four NASCAR Winston Cup Championships. There are only two other drivers with more than four Cup titles: Richard Petty and Dale Earnhardt (both had seven titles). In 2004, Gordon also became the only NASCAR driver with four Brickyard 400 victories at Indianapolis Motor Speedway.

In 2009, Gordon became the first driver to reach $100 million in career winnings in the Cup series.

Secure Jeff Gordon for Your Event

Based on your interest in Jeff Gordon as a speaker or for a personal appearance, Direct Sportslink has provided you additional links below for other sports talent with similar appearance fees, speaker topics, and categories that match Jeff Gordon.