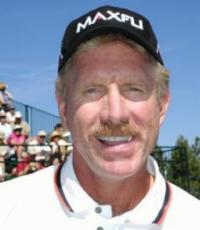 He is a member of the Baseball Hall of Fame; He is widely regarded as one of the best third baseman ever
Fee Range: $20,000 - $30,000
Secure Mike Schmidt
for Your Event

Cooper-Electric Supply was in search of a Philadelphia sports celebrity who could increase awareness at their important grand opening. Direct Sportslink secured Mike Schmidt for his appearance which included autograph signing, picture taking, and a meet and greet with guests. Cooper-Electric Supply was thrilled with Mike's appearance. Please see the testimonial below. To hire Mike Schmidt for any appearance, speaking engagement or endorsement please contact Direct Sportslink for an immediate fee quote.

Mike Schmidt's appearance made for a fantastic event! We had an awesome crowd and everyone enjoyed meeting him! Thank you very much for your support and help. Your company was reputable, easy to work with and most important, accommodating from start to finish.

Schmidt was accepted to Ohio University, (Athens, OH) in 1967 and became the school's best baseball player, mostly playing shortstop. In 1971 he was drafted in the second round by the Phillies. The draft pick immediately following him was George Brett, another great third baseman whose career would closely parallel Schmidt's.

In 1974,he led the National League in home runs and demonstrated astounding prowess with the glove. A patient and powerful hitter, Schmidt was best known for hitting many home runs and drawing many bases on balls. For the rest of the 1970s Schmidt excelled at bat and with the glove, winning two more home run titles and a succession of Gold Glove Awards. He helped the usually awful Phillies win three straight division titles from 1976 to 1978, the team's first postseason appearances in 26 years.

Over his career Schmidt set a vast array of hitting and fielding records. In addition to his MVP Awards, Schmidt won ten Gold Gloves, led the league in home runs eight times, in RBI four times, OPS five times, and walks four times. He was named to twelve All-Star teams. Schmidt finished his career with 548 home runs and 1,595 RBI, two of the many Phillies career records he holds.

In 2002 Schmidt was hired by the Phillies to work for several weeks as a hitting coach, each spring training. In October of 2003, Schmidt was named the manager of the Clearwater Threshers in the Florida State League, a Single A team within the Phillies minor league system. He managed them in the 2004 season and then resigned.

His uniform number 20 has been retired by the Phillies, and he has been honored with a statue outside the third base gate at the team's new home, Citizens Bank Park.

Secure Mike Schmidt for Your Event

Based on your interest in Mike Schmidt as a speaker or for a personal appearance, Direct Sportslink has provided you additional links below for other sports talent with similar appearance fees, speaker topics, and categories that match Mike Schmidt.