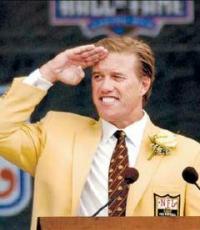 The National Wood Flooring Association hired Direct Sportslink to secure John Elway for their annual association meeting in Denver. Elway, a succesful businessman, shared his thoughts on winning business strategies. After his speech, he answered football related questions from a passionate football audience.

What a wonderful experience Direct Sportslink provided the National Wood Flooring Association and our attendees in booking John Elway as the keynote speaker for our annual convention and expo. The personal attention to detail and outstanding customer service every step of the way made our job so much easier. Not only was it a pleasure working with you - it was fun too. We look forward to working with you again this year and in years to come.

Elway attended Stanford University where he played both football and baseball. His last football game at Stanford was one of the most famous games of all time, the 1982 Big Game versus the University of California, Berkeley (also known as Cal), which ended with "The Play", an amazing and infamous play with five lateral passes that allowed Cal to win the game. He won Pac-10 Player of the Year honors in 1980 and 1982, was a consensus All-American, and finished second in Heisman Trophy balloting as a senior. In 2000, Elway was enshrined in the College Football Hall of Fame.

In the 1983 NFL Draft, Elway was selected as the 1st overall pick by the Baltimore Colts. The Colts traded him to the Denver Broncos for two veterans and a first-round pick in the 1984 draft.

Elway lead the Broncos to Super Bowl appearances in 1986, 1987, and 1989 - however all ended up losses for the Broncos. It took Elway another eight years, but eventually he did lead his team back to the Super Bowl in 1997. The Broncos won Super Bowl XXXII and repeated this feat in 1998 as Elway was awarded the MVP of Super Bowl XXXIII, throwing for 336 yards and 1 touchdown with no interceptions, while also scoring a rushing touchdown in Denver's 34-19 win over the Atlanta Falcons; it was his last game.

Elway is regarded as one of the top quarterbacks ever to play the game. At the time of his retirement, he had more wins than any other quarterback in NFL history and the best winning percentage in league history (148-82-1), and was tied for most Pro Bowl selections for a quarterback (nine). He was third to Dan Marino and Brett Favre in career passing attempts and third behind Marino and Favre in passing yards and completions. He was also the second player ever to score a rushing touchdown in 4 different Super Bowls (running back Thurman Thomas was the first).

Secure John Elway for Your Event

Based on your interest in John Elway as a speaker or for a personal appearance, Direct Sportslink has provided you additional links below for other sports talent with similar appearance fees, speaker topics, and categories that match John Elway.